Lampix, a US-based fintech building a blockchain-based ‘image mining’ network for augmented reality or any other computer vision systems, raised 11,111 ethereum (ETH) – a little over $3m – from investors in three minutes during a ‘pre-sale’ crowdsale token launch (CTL) of their PIX token this week, together with partner company ICO.info.

At the prevailing exchange rate of $285 USD/ETH at the time, Lampix, with offices in New York and San Francisco that transforms any flat surface into a smart surface using machine learning and computer vision, pulled in $3,166,635 of investment prior to the crowdfund in PIX tokens being opened up to the public for a 10-day period from August 9, 2017.

Since being created in 2015, Lampix has garnered paying clients from the likes of Bloomberg, PwC and large retail chains amongst others, and is creating what is described as a “new blockchain that will hold data-sets of real world objects.”

This data is said by the company, which won the best Augmented Reality and Virtual Reality company this March at SXSW festival, the largest festival of its kind in the world, as being a “vital pre-requisite” for augmenting reality systems ranging from smartphones, wearable glasses, or their own Lampix product. The founders behind project believe that Lampix will impact humans as much as computers or smart phones in the future.

Bold stuff – but why do we want smart surfaces and Augmented Reality? Well, the team at Lampix believe they can free human computer interactions from digital screens. As their website stated: “Think Tom Cruise in Minority Report. Imagine your room in five years: you will be able to use any surface around you as if it was a computer. The ability to transform any surface into an interactive computer (augmented reality) is going to unleash applications we have not even conceived of.”

The crowdfund itself is being structured in three stages. Specifically, day 1 of the crowdfund had a token sale cap slated of $20 million (m) minus the total amount of tokens during the pre-sale with a 15% bonus. Subsequently, day 2 will also has a maximum of $20m but with a 10% bonus of PIX tokens for sale. Then finally from day 3 until the tenth, a third and last $20m tranche of PIX tokens will be made available for purchase at a 5% bonus.

However, in order to enable Lampix to reach its full potential, the firm said it needed to build a “billion-picture-and-description database”, and indicated it required a total of $60m to fund creation of their computer vision machine learning distributed database and to build the Lampix ecosystem.

The plan is to use the capital raised to pay as a bounty the image miners for the database, to build the database software (both for image processing and the blockchain part), build the Lampix software and hardware (manufacturing and App development costs), as well as to help promotion of the entire ecosystem through sales and marketing, and pay staff salaries.

But what if this $60m target is not reached by August 18, you might well be asking? When canvassed about this, George Popescu, CEO of Lampix and an MIT alumni based in New York, commenting in that event said: “Everything will be smaller and slower. We would cut the sales and marketing parts, the initial database bounty we start with will be smaller.”

He added: “And, instead of ordering a 10,000 Lampix-device run we will order a smaller one. Thus far we have raised [over] 15,000 ETH, which is about $4.5m and already a significant amount of money to enable us to do all of this on a smaller scale.” 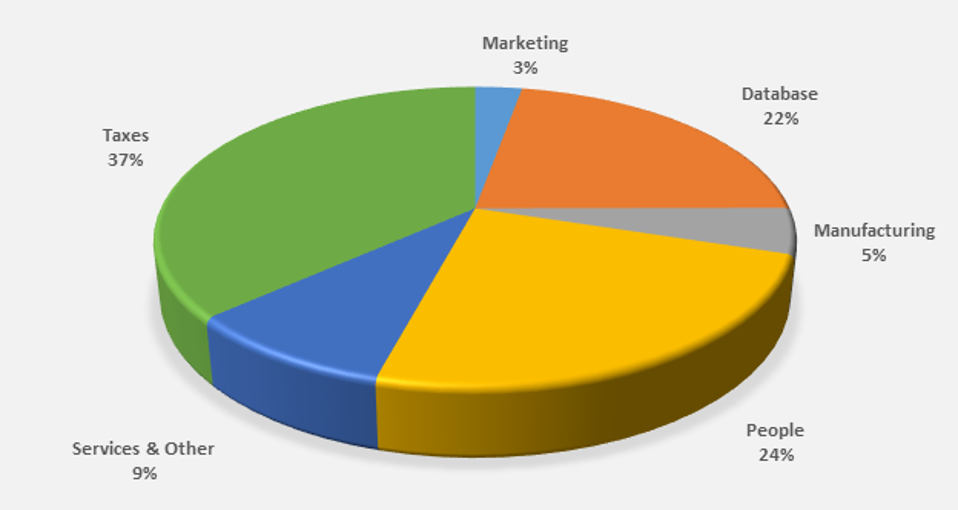 A pie chart showing a breakdown of the where funds being raised by the PIX token sale will be allocated. (Source: Lampix).

The Offering & Use Of Funds

Lampix are creating a supply of just over a 1.1 billion (bn) PIX tokens. Intending to sell 50% of the tokens in the token launch over three days, they need to raise around $60m to make any surface a smart surface over the next four to five years.

The funds collected through the launch will be used to cover the expenses of the project until it starts making profits and sufficient cash flows to function on its own. According to an 85-page whitepaper on the project, Lampix stated that it expected to make profits by 2021.

How much is a PIX at launch?

One PIX is equivalent to $0.12 during the crowdsale token launch, with tokens being distributed as follows: (a) Issued – 50% of the tokens will be issued for the ICO; (b) Reserves – 30% for data purchase; and, (c) Company/Team – 20% earmarked for research and development.

A Lampix spokesman said: “We will use PIX tokens to grow the data ecosystem through purchases and payments. The crowdsale token launch is a vital component to bring the Lampix and database to fruition, which will play a key role in developing augmented reality applications across many devices.”

Lampix’s Popescu, who holds three Masters degrees in Computer Science and Electrical Engineer, 3D Printing and Nanosciences, commenting on the application of blockchain technology going forward, said: “It has major application beyond currency and programming. We have invented here a big data crowdsourcing plan, which we think can be applied in many other directions. And, I think tomorrow’s Google or Facebook-size company will be built using blockchain.”

ICOINFO, established in July 2017 that is partnering Lampix, separately revealed that is on the lookout for robust ICO projects from all over the world, which will allow users to participate in the blockchain industry.

Those wishing to participate in the PIX Token distribution or purchase the tokens for investment purposes should fully understand the details outlined in Lampix’s whitepaper, which can can be read here, before investing. For a video about the platform, how it works and what one can do with it can be accessed via this link.

From our point of view, medical travel abroad means benefiting from your vacations and saving on your dental or cosmetic treatment, right here, in the heart of Transylvania, the famous historic region of Romania. If […]

BOSTON–(BUSINESS WIRE)–AirFox, the company making mobile data and internet more affordable for millions of people, today announced it closed its $6.5 million ICO pre-sale weeks earlier than scheduled. The ICO will open at 10 a.m. […]